Electric Bike vs Vespa: Ranked on 9 Key Criteria (#5 is Critical) 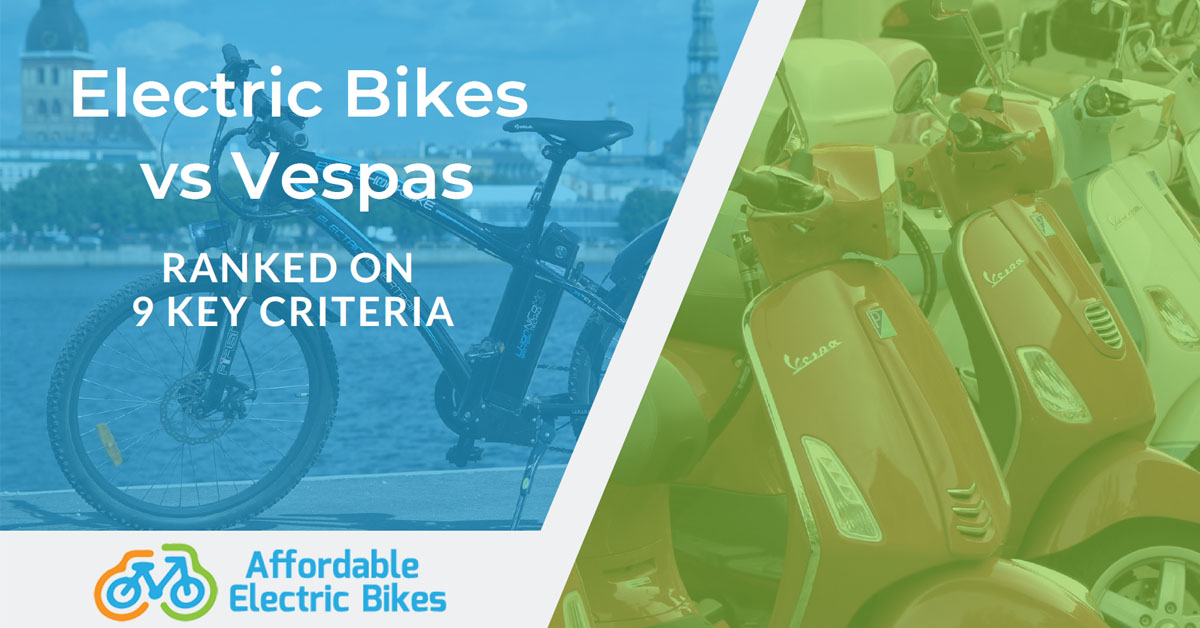 Nothing beats maneuvering effortlessly through city traffic on a small, eco-friendly ride. Electric bikes and Vespa scooters both provide a convenient and efficient mode of transport for your daily commute, but there are some key differences between them that are important to understand before you decide which is the ideal ride for you.

So, which is best, an e-bike or a Vespa?  The answer is; it depends what your priorities are…

It also depends on which styles and models you’re looking at. Electric bike styles range from compact foldable bikes to long-range and mountain bikes. While originally Vespas were gas-powered scooters, they now also have a line of electric scooters. As we compare all these features, it will help you clearly understand what option is actually the best for YOUR daily commute. Below we examine the following facts and features that need to be considered before you make your decision.

However, before we delve into that:

What is an E-bike?

An electric bike (e-bike) looks like a conventional bicycle but it has an electric motor mounted in either the front hub, center hub, or rear hub. The latest versions allow the rider the option of pedal assistance or full throttle. In cases when battery power has run out, you can pedal your way home without any friction, just like a normal bike. 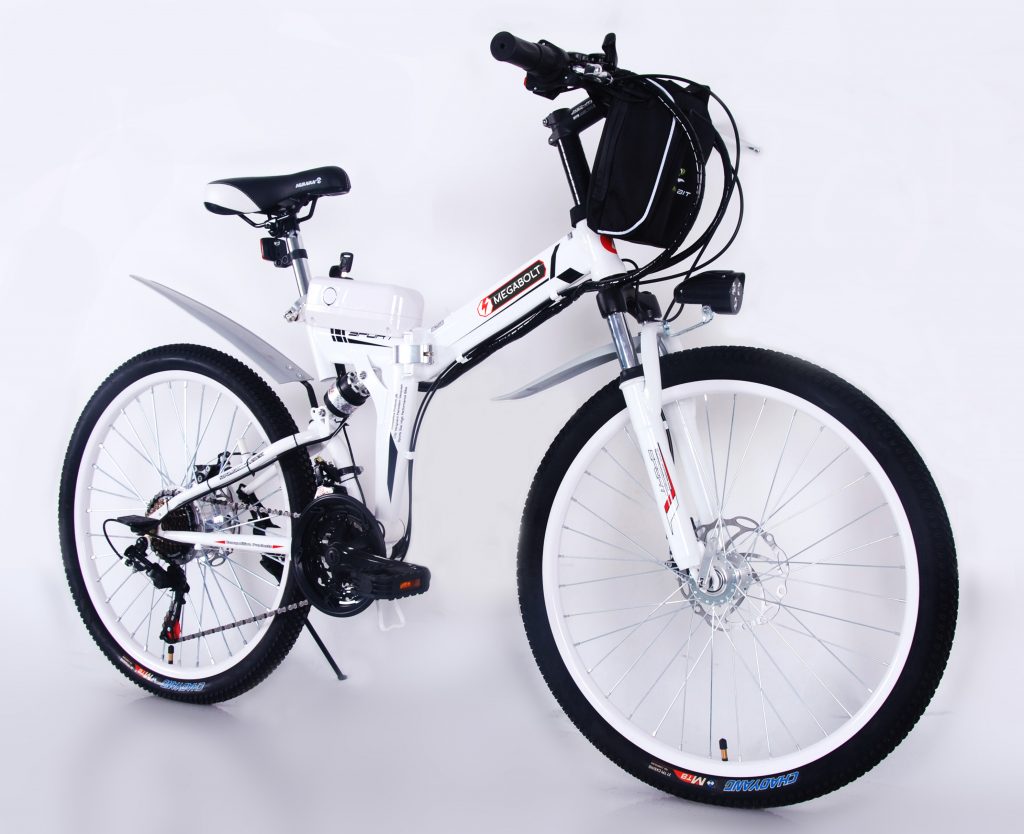 For the throttle control, apply the old tactics of the motorcycle; twist the throttle on the handle to accelerate. Pedal assist on the other hand is a minor boost from the motor when pedaling. The faster you pedal, the more help you get from the electric motor. Some Ebikes offer variable pedal assistance levels, such as 1:1 (motor matches your pedal effort), 2:1 (motor doubles your pedal effort) etc.

E-bikes come in many different types and sizes. Some look like a regular bike, while some take the vintage look that puts a modern twist on a classic bicycle look. Everything comes at a price – there are bikes with fat tires, full suspension, and more power. It all depends on the type of terrain and distance you want to cover. There are even some powerful off-road electric models with motors exceeding transport regulations, more like a dirt-bike. For these, you need to obtain a license and insurance to have it on the roads. (Typically this is not needed for off-road biking, but it’s best to check with your local laws and regulations.)

What is a Vespa?

Vespa is a chain of lightweight scooters used by millions in the world for flexible transport. It is fast, easy to park, and common. Vespa began as a gas-powered scooter with a romantic carefree appeal in the 80s. However, innovation has made it possible to introduce the latest version, which is an electric-powered Vespa model, classified as an e-bike scooter. Gas-powered Vespas can sometimes achieve freeway speeds, although the electric models are not quite as fast, although the company doesn’t explicitly state their top speed. You DO need a drivers license and registration to ride a Vespa in the street, and depending on the motor size you may also need a motorcycle license. These scooters are throttle-controlled so no pedaling is required. 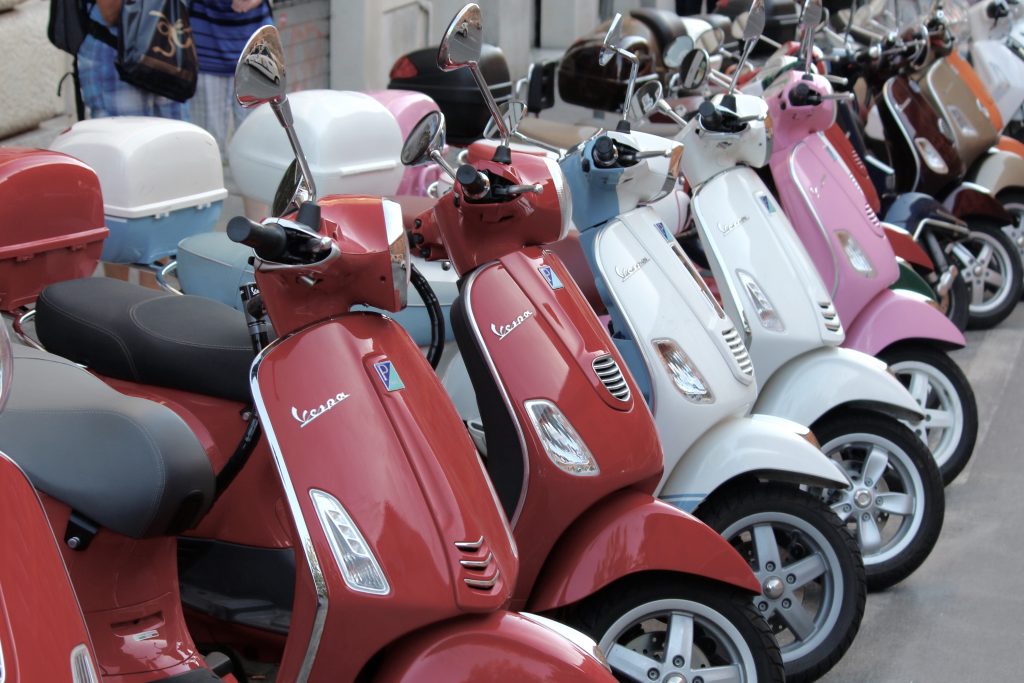 E-Bike vs Vespa: Which One is Best for You?

Winner: E-Bike
Compared to Vespa, the purchasing price of many e-bikes currently on the market is more affordable. Most Vespa scooters would go for $3000 and up, unless you find a well-used one. For the electric bikes, the price can begin for at less than $1000 for the lower-power models, but high end e-bikes can cost upwards of $5000. Obviously the cost depends on your needs, but generally, you’ll find it’s more affordable for an entry-priced E-bike versus a Vespa. Electric Bikes are still quite new, so you can expect the price of a quality e-bike to decrease over time as the technologies become more widespread.

Maintenance is also critical to note as maintaining a scooter is more involved compared to an e-bike. Also, the gas-powered Vespas will require additional fuel and oil costs. Whereas, the Electric Bikes can be charged in any normal power outlet at very minimal costs. Keep in mind that generally a Vespa will take you further under power, because the gas-tank can store more energy than batteries. However, with an E-bike, if you run out of juice you can still pedal to your destination. This isn’t really an option with the Vespas.

Winner: Vespa
Gas-powered scooters have out-muscled their distant cousins the e-scooters in speed for a long time. Fortunately, innovation has brought about powerful motors and lighter batteries making e-scooters faster than ever before. But, with the speed comes trade-off; more Vespa speed comes with more regulations and insurance as well.

For Electric bikes, you should ensure the top speed is governed to comply with the local regulations. (typically a max of 25MPH in the US)
Gas-powered Vespas are designed to safely go over 60MPH, while any speed over 35 on an Ebike would be extremely dangerous, though theoretically possible without a restricted motor.

Winner: Toss-up
Both the Vespa and the e-bike have pros and cons depending on the terrain and the owner’s lifestyle. There’s no need for a gas station to have the ebikes work for you. The recharge process is simple: find an AC outlet, plug in the battery, wait about 3-5 hours (if the battery is dead), and you are good to go.

Some modern cities such as Toronto are eliminating gas stations from downtown meaning that it would be hard to access gas. Electricity is the new wave, as we move away from fossil fuel energy with its gas fumes, oil changes, and tune-ups. You’ll still be required to perform regular adjustments for your ebike including checking the brakes and general maintenance. However, the overall process is easier and much cleaner, compared to gas-powered Vespa scooters.

With e-bikes, you will never fail to get to your destination even if the battery dies. You can always pedal, just like a normal bike. Nevertheless, a Vespa on a dead battery or empty tank means that you are likely to “push” your way home. Also, if you like in an area where theft is common, it’s much easier to bring an e-bike indoors than a Vespa scooter.

On the flip side, if you need to travel on highways regularly, or travel 60 miles at a time or more, then the longer range and higher speeds of the Vespa would be better suited to your needs.

Winner: E-Bike
Different states have different laws regarding Vespa – but brace yourself for more talks with the police when you choose a scooter over an e-bike. There are areas where Vespas are classified as motor vehicles meaning that it is necessary to have a license and insurance, and all the associated laws that go along with regular motor vehicles.

Whereas, in most locales, no license or insurance is needed to ride an electric bike. Plus, to most law enforcement officers, someone on an Ebike is almost indistinguishable from a regular biker, so they are most commonly ignored. However, this fact has led to some abuse by ebikers with little or no regard for others. They may ignore traffic rules and are considered dangerous for road users. Although it’s much less likely you’ll get pulled over on an Ebike, you have a greater responsibility to keep yourself and others on the road safe by following regular bicycle protocol.

Winner: E-Bike
With Vespa, the vibrations on road and bumps are easily noticeable, as they travel directly from the rear wheel to your seat. You can feel the vibrations through your whole body when riding a scooter. Maybe the engineers are working on some new tech to fix this issue with Vespas. It would be trouble if you’re surprised by a pothole bigger than your scooter-wheels. Many e-bike types and models available today have built-in shock absorbers, plus you can easily stand to use your legs as shock absorbers on rough terrain. Plus the higher agility of ebikes makes it easier to avoid large bumps and holes.

Winner: Both
Both the e-bike and the Electric Vespa models are positive for the environment because electricity can come from renewable sources, and doesn’t produce emissions. While gas-powered scooters are certainly more fuel-efficient than driving a car, some older, or poorly maintained scooters can be notorious for fume emissions. This has greatly affected Asian countries like Japan and China where older gas-scooters are common. However, the “switch” to electric has greatly reduced the smog problem currently witnessed in the region.

Winner: E-Bike
Generally speaking, an e-bike is the safest compared to a Vespa. The seat is higher up making the rider more visible to other road users, and typically the top speeds are much lower than a Vespa. However, when it comes to nightlife Vespas have more built-in lights including indicators, for safer late-night driving with or without traffic. These can be added to E-bikes for additional safety.

Most bikers agree that it is easier to balance on an e-bike than a Vespa because they are lighter, and you are standing when you come to a stop. You also have more maneuverability on a bike compared to a scooter. Going downhill with an electric bicycle feels more stable especially on hilly terrain. It is even easier to ride a bike hands-free on some occasions compared to Vespa.

Since Vespas are classified as a motor vehicle you must usually ride in the roads with the other, much bigger cars and trucks, despite the lack of protection beyond a simple helmet. While, with an E-bike you can stick to the sidewalks, trails and bike lanes giving you more buffer from the larger vehicles.

Winner: Both
As long as you are using an electric Vespa, then both options carry the day on noise reduction. The electric motors are almost silent so that all you hear comes from the tires on road. The only problem I have is with the horns. Most E-bikes come with a horn as well, and when used excessively, they can be a big nuisance. Of course, gas-powered Vespas are the loudest option.

Winner: E-bike
Owning a Vespa means that most of the time you will be sitting and just steering using your hands. However, an e-bike usually requires some pedaling at times and the rider can decide the effort to put in when riding. Although many would argue that e-bikes are fitness cheats, electric bicycles are more practical and you can go further with them compared to their conventional cousins.
On pedal assist mode, the rider has to keep pedaling to ensure the motor is on. This shows that even with electric assist, riding an E-bike is still more active than a scooter or car.

Vespas do certainly have their place, especially for those needing efficient transportation over longer distances at higher speeds. However, when you examine key issues like comfort, safety, and cost, e-Bikes are usually the better option for most users. If you are planning to commute shorter trips in crowded areas, then an electric bike will best serve your purpose.

Whichever ride you choose, it’s wonderful to see the movement towards more efficient means of travel. We remain hopeful that electricity will one day fully substitute fossil fuels and help us preserve Mother Nature. Electric bikes and Vespa scooters are both a step in the right direction.

What do YOU think? Why to prefer your E-bike or Vespa?